Recently, I spent some time pulling apart Simon Sinek’s TedTalk on leading from the inside out. I really enjoyed his message about leading from the inside out or starting with the “why” and not “how” of a task at hand. While first part of the Ted video has poor sound, his message is very good and worthy of the time to listen and consider his message. He links his theory to brain research and trying to lead by tapping into the limbic brain. It’s a straight forward video talk with some good messages for all those who attempt to lead from wherever they stand in an organization. In this blog, I’ll review his message from leading from the inside out through to thoughts on the diffusion of innovation. I incllude the chunked out videos for your viewing pleasure.

Leaders Think from Inside Out 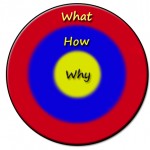 Sinek suggests that this very simple idea describes how successful great leaders differ from other leaders. He speaks of how everyone who is in an organization likely knows what they do but very few can describe why they do it. The role of a leader is not about linking the direction of the organization to what is accomplished, it’s about tapping into the moral purpose of why the organization does what it does. Leadership is about understanding and communicating the moral purpose.

The moral purpose not only inspires those who work within the organization, it is also the most important way to engage the public in your enterprise. Sinek says that people “don’t buy what you do, they buy why you do it.” Thinking of our application in education, very often we embrace a new endeavor and sometimes we really don’t spend enough time talking about the why of the initiative not just the “how” of how do we implement some program or change. Sinek suggests again that if you really want to inspire those within, then you would be well advised so spend much more time on the why than the how.

It is suggested that the link to his Golden Circle is supported with brain research. The neo-cortex is the logical/rational part of the brain and despite every logical reason for an argument or directive, you are more likely to be successful if you can tap into the limbic part of the brain which is more about trust, loyalty and gut decision making. He suggests that when you talk about facts and figures, people understand what you want to do, but when you communicate from the inside-out, you get at people’s values, beliefs and instincts. It is the why that ultimately controls decisions and loyalty, not the what. Sinek says you don’t want to attract people who need what you have, you want to attract people who believe what you believe.

People will work if they believe in the cause

If you hire those who believe in your cause and understand the purpose behind your organization, then people are far more likely to contribute in significant ways. It is also implied that employee morale will be higher. Sinek uses the example of Orville and Wilbur Wright who believed that their pursuit would change the course of the world. Those who worked for them worked for the cause.

The law of diffusion of Innovation

The next portion of this talk is a very nice link to the diffusion of innovation. If you are trying to get employees to embrace a new direction or innovation, it is even more crucial to enage people in the why of the initiative and not just the how.

No matter how good a new innovation is, it is very likely that a few people will adopt it just because it is “new” or novel.  This first wave of those who adopt a system change or innovation are called the innovators and they represent about 2.5% of the population. There is a next wave of about 13% of people who will adopt an innovation and these are called the “early adopters.” Beyond these first two waves is the next portion of the population who represent the tipping point for a system. Getting this next wave to adopt an innovation is not easy. Sinek suggests that the law of diffusion of innovation tells us that you have to have between 15 and 18% of a population to accept an idea before you hit the tipping point. So if you cannot get past the first wave of innovators and early adopters, then you will never get to the tipping point.

The Failure of Diffusion of Innovation

There are many examples of those who do not manage to get to the tipping point. One example from television and technology is TIVO. TIVO was ahead of its time in the development of digital video recording. However, because they focused more on the how features for users rather than the why of the need for customers, the product never took off like it should. Originally developed in 1999, its market share has dropped by 50% since 2006 as other brands and tools have come online.

Sinek says the message about the failure of diffusion of innovation from TIVO is that they “told us what they had but they didn’t tell us why they did it.”

What you do serves as proof of what you believe.

Success in Diffusion of Innovation

Successful stories of the diffusion of innovation are from those who inspire by leading with the why. Martin Luther King did not tell people what they need to do to seek change, he told people what he believed and began from there. As a result, people accepted his cause in mass numbers with a quarter million showing up to hear him speak.

In conclusion, Sinek tells us that there are leaders and there are those who lead. Leaders are people who hold positions of authority and role responsibility. But those who truly lead are those who inspire us. Whether we are individuals or organizations, the why is more powerful than the how.